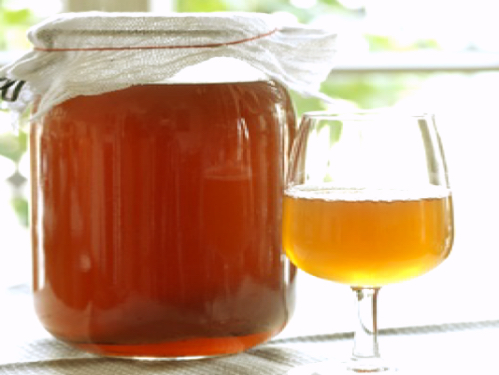 Tangy with a slightly effervescent, zippy earthiness, kombucha can be a refreshing tonic when you’re feeling slightly peaky. 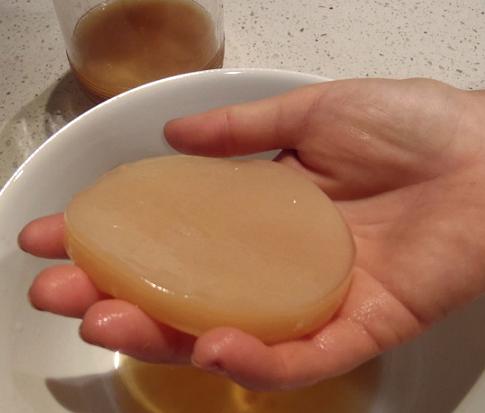 Kombucha is traditionally considered a tonic made from fermented green or black tea. The tea is brewed poured into a suitable glass container, mixed with sugar and then, what is called a Scoby, is added as the fermentation medium. The mixture is then allowed to sit for a few days to a week to ferment into a brew that is purported to enhance health. Kombucha is often referred to as “mushroom tea” but the Scoby is not a mushroom, it is an active community of bacteria and yeast that feeds on the sugar and continues to grow. The zippy fermented quality is a bi-product of the sugar conversion; sucrose is converted into things like acetic and gluconic acid.

From a culinary perspective, Kombucha is an interesting endeavor. On the one hand it’s pretty easy to prepare and pretty low maintenance once the fermentation process is underway. That being said, I think it is important to note that there are things that can go horribly wrong if all the conditions aren’t supportive to the process; instead of health invigorating drink you can end up with a hepatotoxic brew. However, if you are mindful of sterilization and appropriate ingredients, you should be just fine. To make kombucha tea the first thing you will need to do is secure an appropriate Scoby; which isn’t as challenging as it sounds since you can order them from Amazon or even Williams-Sonoma (who knew??). If you do order a scoby from an online source, be sure that it comes in a scoby liquid, that it has not been refrigerated, and that it has not been dehydrated. You may also want to be sure and purchase an organic one. Once you have your scoby you are ready to make some brew

Boil the water, remove from heat and add tea. Let steep for 5-10 minutes (longer than 10 mins tends to be too tannic). Strain and pour into an appropriate glass container (pitcher, beaker, or large jar) then stir in the sugar until all has dissolved. Let the mixture cool to about room temperature and then stir in the scoby liquid and add the scoby. It should eventually once it makes itself at home, float on top of the liquid. Cover with a cloth because you want to keep insects and things out but you definitely want air flow and place in a quiet, relatively dark place to ferment. A cupboard or back shelf does really well. Allow it to ferment for about 7-10 days. Once it is ready to drink, you can pour the liquid into suitable jars, saving a little bit for the scoby and either begin a new batch which can be fermenting while you are sipping your completed product over the next week. As you get more comfortable with the process, you will find that you can add other ingredients to your finished product to change the flavors and qualities. You never want to add anything other than tea and sugar to your scoby mixture. If you ever find mold on your scoby you want to be sure to discard it and the liquid. There is really no way to save the colony once harmful molds and bacteria have set in. One thing to keep in mind – the scoby is a living colony of bacteria and yeast, as such, it needs sustenance and happy vibes to thrive and do well. 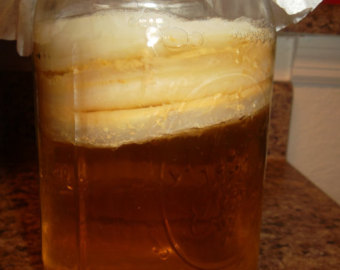 From a health perspective, there are a multitude of caveats where kombucha is concerned. Chances are you’ve seen in on the shelf in your local market or heard a various health “gurus” sing its praises as the heal-all tonic. I think first and foremost the key word is TONIC. That means it is meant to be consumed in small amounts, not quart jars at a sitting. Slurping on a kombucha supersized big gulp is not going to help your health. In fact, it is more than likely going to create some serious health issues. People who have over-consumed kombucha have ended up with some pretty serious liver damage and/or kidney acidosis. So, if you are going to drink kombucha, don’t fall for the hype, make your own and sip in small amounts. One small amount per day is plenty. Second really important caveat: the FDA requires that commercially produced versions of kombucha must be pasteurized. That means the original bacteria is killed off before it is placed in jars. Once it has been pasteurized the bacteria is reintroduced, flavoring is added, and it is sealed up and ready for you to consume from the refrigerator section of your market. The only problem? More often than not the reintroduced bacteria aren’t the same bacteria and enzymes that you would get from a homemade non-pasteurized version, so you aren’t necessarily getting the health benefits from traditional kombucha. Studies have demonstrated that the commercial kombucha compared to traditional tonic kombucha have a wide difference in bacteria, yeast, and even sugar content.

Kombucha has been consumed as a tonic drink in Asian culture for centuries. It is purported to increase longevity and is sometimes referred to as “immortal tea”. Over the past decade kombucha has gotten a reputation as a brew that heals everything from cancer, aids, diabetes, to the common cold. To date there are no studies involving human trials to confirm the efficacy of kombucha. There are a variety of studies examining various components, like the acids and enzymes found in kombucha, for their benefit to health. These studies are challenging to duplicate because there are so many variables in each batch of kombucha. At the very minimum, kombucha has pre and probiotic qualities and can indeed help repopulate the gut with beneficial bacteria, which in turn can help boost immune function, mood, and cognitive ability.