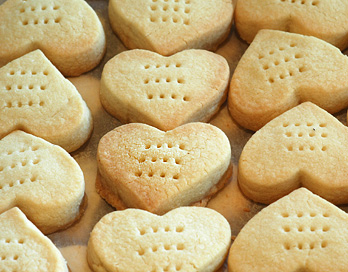 Crisp and sweetly buttery with just a hint of salt, shortbreads are an oh so delicious treat with afternoon tea. 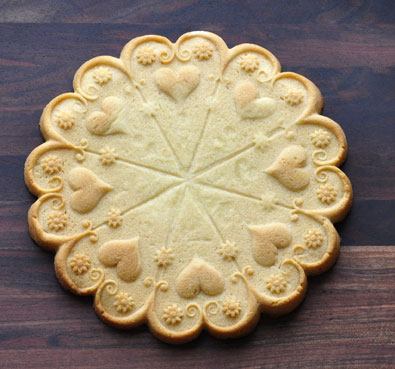 Shortbread is the name for a crisp cookie made from butter, sugar and flour; occasionally other ingredients are added but for the most part, traditional shortbread is just those simple but delicious ingredients. It is believed that shortbread originally was made from the bits of leftover bread dough after a loaf was made. It would be sweetened up, flattened into small disks, and then dried out in the oven until they were crisp. In time, they became their own recipe minus the leavening agent (whether sourdough or yeast) and bumping up the sweet factor. This made them a bit more expensive to make and they became occasional treats during holidays or special events, like weddings. For celebrations the dough was prepared and then pressed into large earthenware pans decorated on the bottom so when baked and tipped out the shortbreads would have a design or decoration appropriate to the occasion. Shortbreads are thought to have originated in Scotland and enjoy a wealth of historical recognition, however, there are examples of other similar recipes throughout Britain. 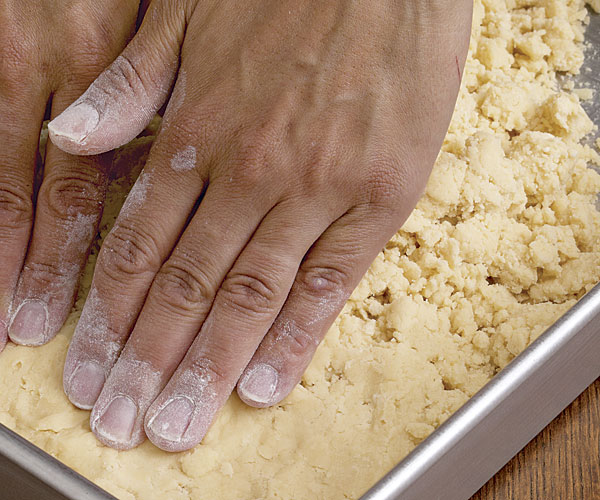 From a culinary perspective, shortbread is relatively easy to make. The trick is to start with chilled butter and cutting it into the flour and sugar until crumbly and then forming it into balls to be rolled out and cut or pressed into an appropriate pan. A basic recipe for shortbread is 1 part sugar, 2 parts butter, 3 parts flour (you can add a variety of flours depending on the texture you desire). You can also add a variety of flavors such as lavender, lemon or orange zest, or perhaps some hazelnut. So basically if you have 1 cup of sugar, you would mix in 2 cups of butter, to 3 cups of flour (which would be kind of an enormous batch of shortbreads but you get the picture). You then chill the dough for about 30 minutes before pressing it out and cutting it with cutters or pressing it into a pan. Bake at 350 for about 15 minutes.

From a health perspective, well they’re basically sugar cookies, so clearly moderation is key as well as the need to use good quality ingredients. A quality, non-bleached, unadulterated flour, with a good quality grass fed butter, and some rapidura or turbinado sugar will give you a different, more traditional, flavor as well as a more healthful option. Although again, I think these are just something to be fully savored in small amounts and enjoyed as the occasional sweet treat they are meant to be.