Juicy and fresh tasting, crisp to the bite and then sweet and grainy; pears come in such a wide variety but they are always delicious. 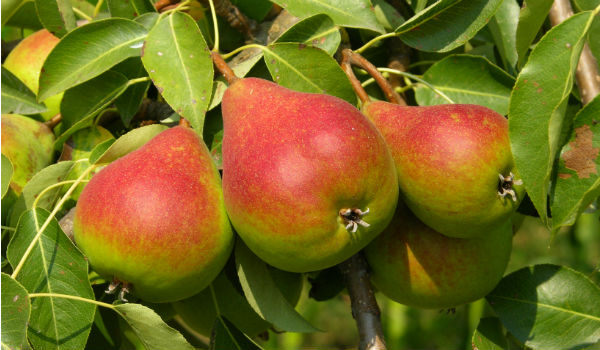 They are as prolific as the apple, with several thousand varieties. I always wonder, with so many varieties, why we only see three or four different types on our market shelves. Where are all the other varieties? How does one get to taste those?  Pears and I have an interesting relationship; it always takes a brief moment to get past the childhood memory of canned pears, which were back then a tasty treat for the most part, but nonetheless quite smooshy. For a person who is almost more sensitive to texture that taste, that can be a bad combination. Nonetheless, fresh pears are nothing like canned pears even when they are very ripe and soft.

Pears and the cultivation of pears have been a part of human culinary endeavor for thousands of years. Archeological digs in various areas throughout Europe have produced evidence of pears as part of prehistoric diet. Roman writings from first century A.D. discuss the grafting of pear trees, the storage of the fruit and some culinary preparations...all of which include the use of honey.  Because of all the different varieties, pears also have an extended ‘season’ for eating; with some harvesting options even extending into the winter months. They come in all shapes, sizes and even colors. One of my favorites is the crimson pear, which has a deep red skin with honey colored inner fruit. 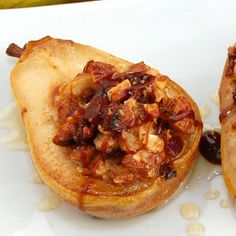 From a culinary perspective, pears are incredibly versatile and interesting in both sweet and savory dishes. They are delicious raw, stewed, baked, and even fried as well as made into jams, ciders, and juices.  One favorite way to eat them is to bake them with goat cheese in the middle and drizzle them with honey... yum! However you decide to eat them just be sure to leave the skin on!

Pears are also highly nutritious and along with the apple make up the top two most nutrient dense fruits. This is due not necessarily to their high phytonutrient content, but more to the combination and variety of nutrients. Where the pear is concerned, the skin is an integral part of its nutritional value; it contains about half the fiber and about three times phytonutrients contained in the rest of the fruit.  Studies suggest that red skinned pears contain even a higher amount of phytonutrients and have demonstrated that they are beneficial in regulating insulin production. Research indicates that including pears in your diet helps regulate blood sugar, improve insulin sensitivity, decrease heart disease, and act as a systemic anti-inflammatory. Studies also suggest that the flavonols found in pears are beneficial in decreasing the risk of certain cancers, particularly esophageal.