Regular readers of our columns will know we are not great fans of wind turbines or solar arrays and we argue they are anything but green or sustainable. However we love the idea of power harvested from the endlessly moving sea and advocate the UK government should back two prototypes projects for tidal lagoons on the Welsh coast at the cities of Swansea and Cardiff.

Why do we love tidal? Well the words most often used about it by experts are ‘endless’ and ‘regular.’ And some recent developments have made us all the more enthusiastic as a growing synergy between Sea Energy and the concept of a Hydrogen Economy is emerging.

Hydrogen is one of the most common elements available to man and it can be used to power vehicles and stored to burn later to provide electricity for the grid.  It’s about as clean and green as you can get as hydrogen combustion emits no carbon and its only exhaust is water. Combined with captured carbon it even has the potential to produce green plastics.

Talk of a Hydrogen Economy was all the rage ten years ago but engineers and investors alike consigned it to the back burner of scientific endeavor for one very obvious reason…hydrogen is all around us but it’s very difficult and very expensive to capture.

Big players like Elon Musk put all their efforts into battery technology basket as the future for ‘cleaner’ energy and, having put their eggs in that basket, they now talk the possibilities of hydrogen down. We’ve written about battery technology in the past months (link here) and there are some huge disadvantages in terms of recharge time and the range of a battery-powered vehicle.

Okay, hydrogen may be hard to capture but if we could then cars could be ‘refilled’ within minute while battery cars will be languishing for hours waiting for a charge. Battery technology also relies on some pretty noxious heavy metals and plastic components.

So what’s new?  It’s the absolutely boundless potential for Sea Energy to capture hydrogen as a by-product. This exciting possibility has been demonstrated in the Orkney Islands of the north of Scotland. There a project called Surf and Turf is using wave energy assemblies to power electrolysers, which split the hydrogen out of the seawater. They are producing enough power to generate electricity for ferries tied-up at the islands’ main harbour of Kirkwall.

It’s also powering the harbour’s own infrastructure and the Island authorities are buying five vans fitted with hydrogen fuel cell range extenders and building hydrogen pumps at a filling station on Orkney. On top of that two local schools on smaller islands in the area are using hydrogen for heat and electricity. 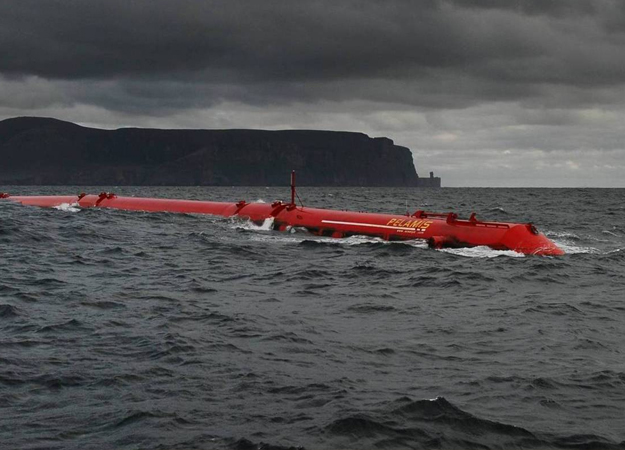 Imagine this multiplied around the long coast of the UK, which has some of the highest tides and active wave breaks in the world. The turbines on tidal lagoons could be capturing hydrogen from the sea while still providing a regular direct input of power for the grid four times a day. Advocates say that by 2050 there might be so much hydrogen produced it could be stored - possibly in old underground salt mines - for future use.

This is the vision that’s exciting scientists, arrays of wave power units around Britain’s coast producing hydrogen as a by-product of conventional electricity generation. The endlessly restless seas around the coast of Britain, might offer the solution to the problem of reasonably priced hydrogen capture.

But there’s more. A research team at the University of South Florida, led by Professor Yang Yang, has developed a cheap, new generation catalyst from nanomaterial that can extract hydrogen from sea water using sunlight. Until this breakthrough it had only been possible to do this with pure water, which is an expensive to produce research tool. This breakthrough could see mass harvesting of hydrogen and leave the doubters like Elon Musk standing in the starting blocks as the hydrogen economy takes flight.

The Japanese are already committed to hydrogen. They have nearly a quarter of a million hydrogen fuel cells at work producing heat and electricity in homes with high efficiency ratings. Big names like Toshiba and Panasonic are producing these fuel cells and the Japanese government says there’ll be 5. 3 million of these units in place by 2030.

With hydrogen capture technology advancing so rapidly we believe it will be a lot sooner than that. Indeed Japan hosts the Olympics in 2020 and they intend to power the whole of the Games with hydrogen.

Bohemianmojo believes Sea Energy in synergy with Hydrogen is the way to clean up the planet and offers the possibility of a truly green future. Worth backing? Of course it is and we wholeheartedly support the concept of a Hydrogen Economy.

It’s just a shame the blinkered UK government doesn’t think it’s worth considering. Two weeks ago they pulled the plug on renewable energy subsidies for the Orkney scheme in what Bohemianmojo considers is a shameful omission.

The truth is the UK government has already paid up-front for the profusion of relatively inefficient, offshore wind turbines with over £20bn in subsidies. In their mindless chasing of international carbon targets they’ve left themselves with no cash for these other, more exciting and far reaching, forms of power. We believe our sustainable future lies with the power of the oceans and with hydrogen.