Breakfast starts with the sea on toast. Bara Lawr tastes of the surf and the very ebb and flow or the tide.

It took me a moment to get used to the flavor, but then I was able to appreciate the depth of sea flavor in small amounts with my eggs and tomato and toast.

Laver Bread..isn’t...bread that is....at least not in the sense that I know bread. I have heard quite a bit about Laver bread, so was very excited to give it a try. When we finally were able to make it to the Swansea Market in Wales, to purchase some local Laver Bread, I was skeptical to say the least. It was, first of all, most definitely not bread and second of all, it looked quite like overcooked spinach or worse. Hmm... what had I gotten myself into? This mornings breakfast was the great unveiling...

Laver bread or Bara Lawr, which is its Welsh name, is basically seaweed, in fact, it is the same seaweed used to make sushi. In Japan it is called Nori and is preserved as sheets of seaweed used to wrap sushi. However, for Welsh Laver Bread the sheets of seaweed are cooked down to a dark green pulp, which is what we purchased in the market, and then cooked again with bacon and/or oatmeal to make a sort of paste or almost porridge like dish of seaweed. Initially, for a number of reasons I was a little nervous to try it.  However, I persevered and after the obligatory 9 bites (it takes your brain 9 bites to decide whether you really like something or not and are not just giving in to whim), I decided that, in fact, it was quite okay and in smaller amounts was really a good accompaniment to my meal. In fact, truth be told, I would and will have it again. 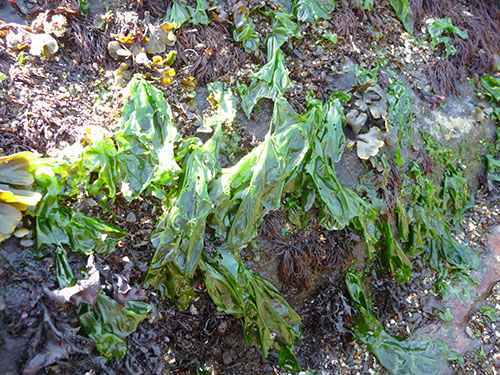 Bara Lawr has been a tradition Welsh food for centuries; in fact, it was recorded in writings in 1607 as a food that was a “survival” food for people forced from their homes by the Vikings in the early 5th/6th centuries. It was recognized as a high energy and nutrient dense food.

From a culinary perspective, Bara Lawr is made by gathering seaweed then cooking it down to a paste which can then be used in soups and stews or fried up with bacon to make small seaweed pancakes.

From a health perspective, Bara Lawr is an amazing source of nutrients. It’s seaweed, after all. It is rich in minerals and vitamins; especially Vitamins b12, iron, calcium and iodine. Seaweed is considered a “superfood”. It is a powerful anti-oxidant and anti-inflammatory, which can help reduce the risk of inflammation related ailments like rheumatoid arthritis and autoimmune disorders. Research also suggests that consuming seaweed can help eliminate mood and mental imbalances like depression and anxiety. Seaweed also helps regulate estrogen and estradiol which helps manage PMS and other hormonal imbalances. It is also beneficial for gastrointestinal repair, helping with ailments like IBS or Crohn’s Disease.

So, if you’re able to give it a try, some Bara Lawr could be a great accompaniment to breakfast; boosting your appetite and your health.

Get the Nitty Gritty