The idea of foraging conjures images of grubbily rooting through muddy undergrowth in the heart of some primeval forest. This was only half true on our amazing day with Fred Gillam, the foraging wizard. The morning we met Fred was cold, windy and threatened of a downpour as we piled in the car, trying our darnedest not to be victim to Mojo Meantime again! Today we were foraging with Fred Gillam, the amazing forager. We didn’t yet know just exactly how amazing he was but were excited to find out.  I have to admit even though I was excited to sightsee I was a little skeptical at what we might be foraging at Uffington White Horse which was where we to start our adventure for the day.  What could we possibly forage on an open hillside? Didn’t foraging require the dank, damp, and brooding underbelly of ancient forests??? 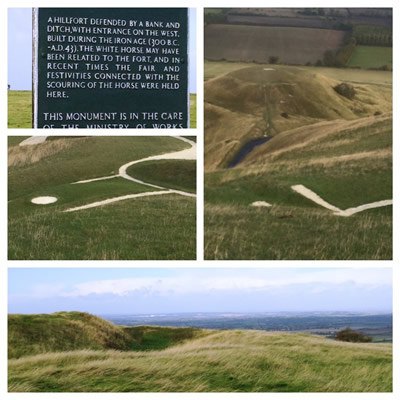 Fred met us in the parking lot; only slightly behind schedule we bundled up and began heading up the hill.  As we stepped out onto the expanse, I couldn’t help but pause for a moment to take in the amazing view around the valley, sobering my thoughts as I tried to imagine how this must have looked centuries upon centuries ago and Fred began filling us in on some ancient history.  Suddenly, it occurred to me that this was going to be no ordinary day; we were in the presence of yet another MajicMaker and could expect an adventure for sure.

As we fought the wind and traipsed up the hill Fred began pointing out the flora and fauna and my eyes began to see the landscape in a whole new way.  We befriended Nettle, tasting its succulent little leaves with no adverse effects (once Fred taught us the secret). We collected small bits of Yellow Dock, Amaranth, and even sampled some Hawthorne berries. 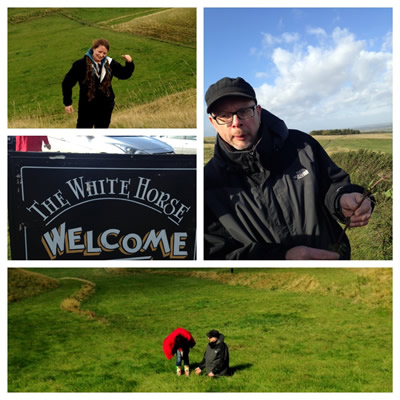 Walking along the impressive ridge, we worked our way over to Dragon Hill; which possesses an unassuming, yet somehow riveting presence. Legend has it that this is where St. George slew the Dragon (a legend I find quite distasteful for a variety of reasons) and the small, bare spot in the middle of the hill that will grow no foliage is where the Dragon’s blood was spilt.  I liked Fred’s suggestion much better that this was indeed a place for ritual and sacred activities.  There is a Hawthorne tree at the entrance to the hill so I picked a few berries and walked onto the plateau, allowing the land itself to draw me in. The sensations that happened next were unexplainable as I felt a heaviness settle onto my heart, perhaps it is no accident that Hawthorne grows in ready reach. As the wind buffeted, I left the hilltop filled with a sense of having touched the primordial pulse. As I was wondering how to clear my head and my senses and dive back into the day, the most perfect downhill slope presented itself...Nothing for it but to tuck and roll! It was perfect medicine as I bounced down the hill, smelling the sweet grass and rich earth with each rotation, finally coming to rest on the valley floor. Silly with laughter and a bit dizzy, I was ready to plunge on to the next phase.  Looking back up the hill to see if there were any other takers, I clapped and cheered as Fred the Forager and Michelle follow suit, bounce, bounce, bounce. After a little more wandering and learning we made our way back to the cars, ready to get some lunch and continue to the Savernake forest.

As we left White Horse Hill, I again was struck by the history and pre-history of this place, stopping on the car park ridge for one final sweeping glance of appreciation. 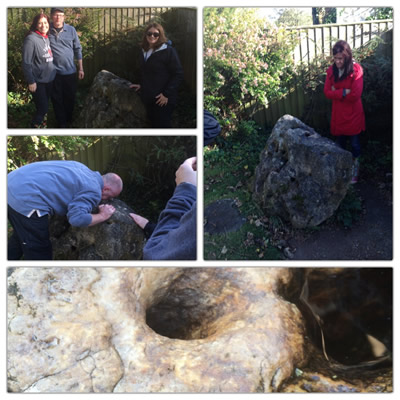 We got to the Pub for lunch just in time as the sky opened the floodgates and rain poured. After our lunch of traditional fish and chips, cider, and plenty of heartwarming conversation we were now fast friends and ready to move on to the Savernake Forest....but not without stopping first at King Alfred’s blowing stone. The Mojo team was a twitter, what the heck was a blowing stone??? According to legend, the blowing stone was how King Alfred summoned his troops to fight off the Viking hoards and further legend reports that anyone capable of blowing the stone correctly, which will allow it to be heard up on White Horse Hill, is the future King of England.; Needless to say, none of us are going to be ordained as royalty any time soon. We all took several attempts, allowing ourselves to settle into the good humor of the ridiculous attempts to make a stone produce a magical note. By the time we were all light headed from our attempts, we decided it was time to continue to the Savernake. On to the mushrooms!! 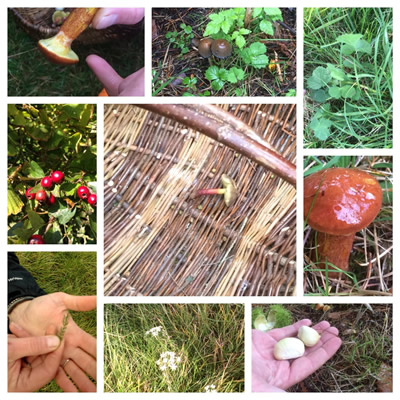 The Grand Avenue into the Savernake Forest is impressive. The ancient trees and overgrowth instill a sense of mystery and hushed appreciation. We climbed out of our cars and were immediately regrouped by Fred’s command that for the next few hours we pick nothing, touch nothing, that he didn’t approve of first. We had no idea there were so many varieties of mushrooms with so many adverse effects! The rest of the afternoon was spent rummaging under fern leaves, looking into piles of leaves and the underside of felled trees. Majken proved to be the master of forest foraging. Her skillful eye and quick hand soon filled our foraging basket under Fred’s careful and informative tutelage. Soon we had enough mushrooms and other foliage like wild cress and rocket to compliment a lovely dinner. The rain began to pour again so we decided to adjourn to Bridge Cottage and prepare our day’s efforts. Alun graciously provided and prepared wild partridge. Fred cooked up our mushrooms, and the rest of us tossed up a wild salad and poured the wine we had acquired just the day before in Wales. 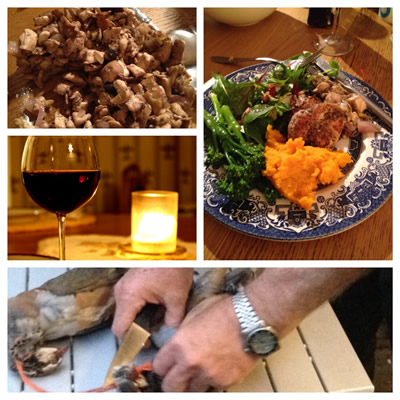