Well it’s the natural product straight from the cow;  not pasteurised or homogenised; not interferred with in any way. And that freaks out government food agencies. 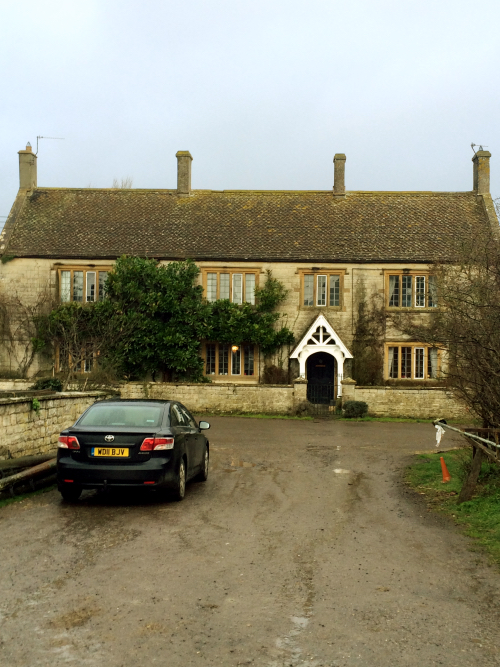 Mention raw milk and health officials pale whiter than milk itself as they conjure visions of a tuberculosis epidemic or an e coli outbreak. So, according to the US Food and Drug Administration, “This raw, unpasteurized milk can carry dangerous bacteria such as Salmonella, E. coli, and Listeria, which are responsible for causing numerous food borne illnesses.” 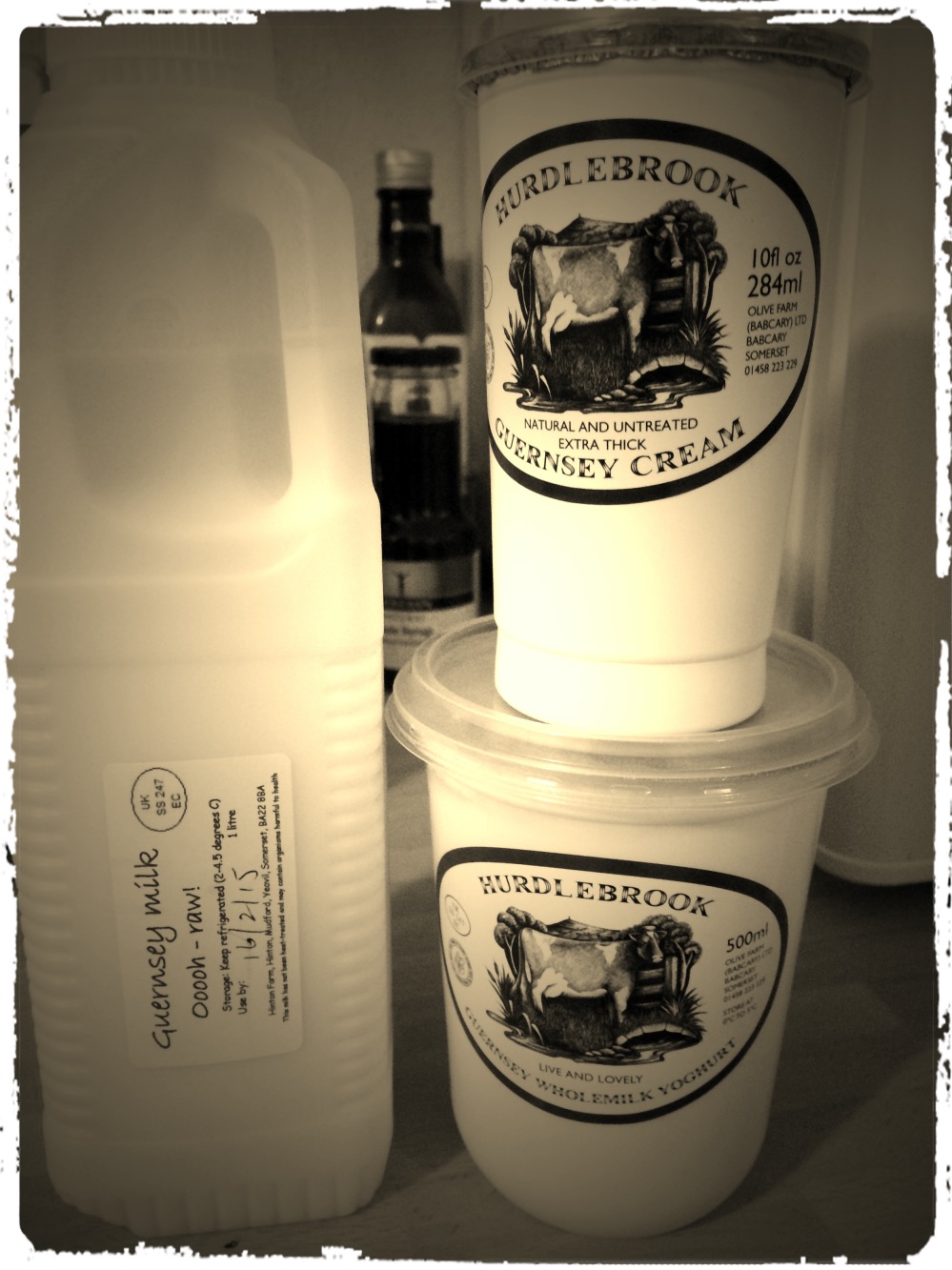 That dire tone of official disapproval makes raw milk difficult to find in developed western economies. And along with the health warnings come regulatory hoops and hurdles for those who produce raw milk which makes staying in business a job in itself.

Official disapproval also explains why raw milk dairymen are the most fastidious of farmers. During our journey we found that super high standards of cleanliness are the norm to keep nasty pathogens out of raw milk and away from the consumer.

The milk story is a complicated one and for those who want to learn more there’s a link to an article by Stephanie, with all the detail. But here’s the quick take on it. Pasteurised milk has been around since the mid 19th Century as a standard intervention to prevent the spread of TB through the growing population of the industrial revolution. 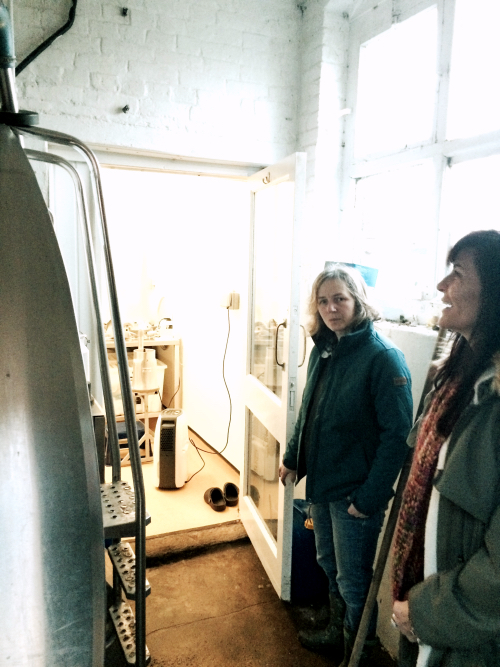 These days practically all milk is pasteurised or homogenised. Basically it’s heated and agitated to rid it of microbial life forms and a lot of its essential goodness as well in the process. Outside third world countries the production and sale of raw milk is strictly regulated but its also increasingly sort after by a growing band of officianados. 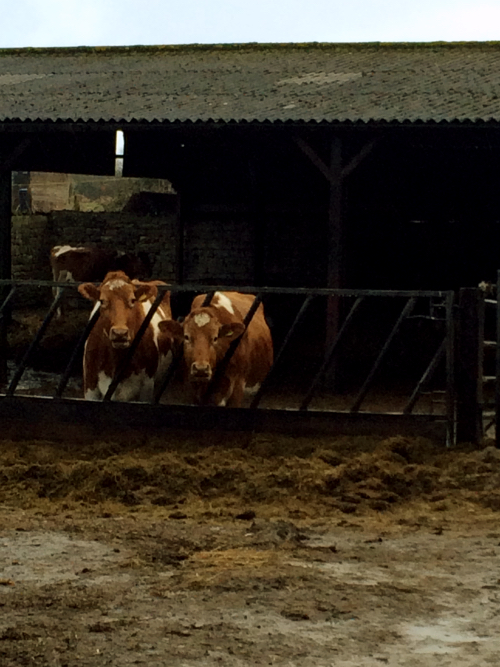 Why the interest? Because they know raw milk comes from traditional breeds of cow which produce the ‘golden’ A2 string of proteins not found in the new high yield breeds like Holsteins and Friesians.

In the UK there are no more than a couple of hundred raw milk dairies and all of them are in England and Wales where it must be sold directly to the public. In Scotland the sale of raw milk is completely banned.

So with this knowledge at the back of our minds Stephanie searched Somerset, a county with a cluster of raw milk producers, for the almost prohibited. 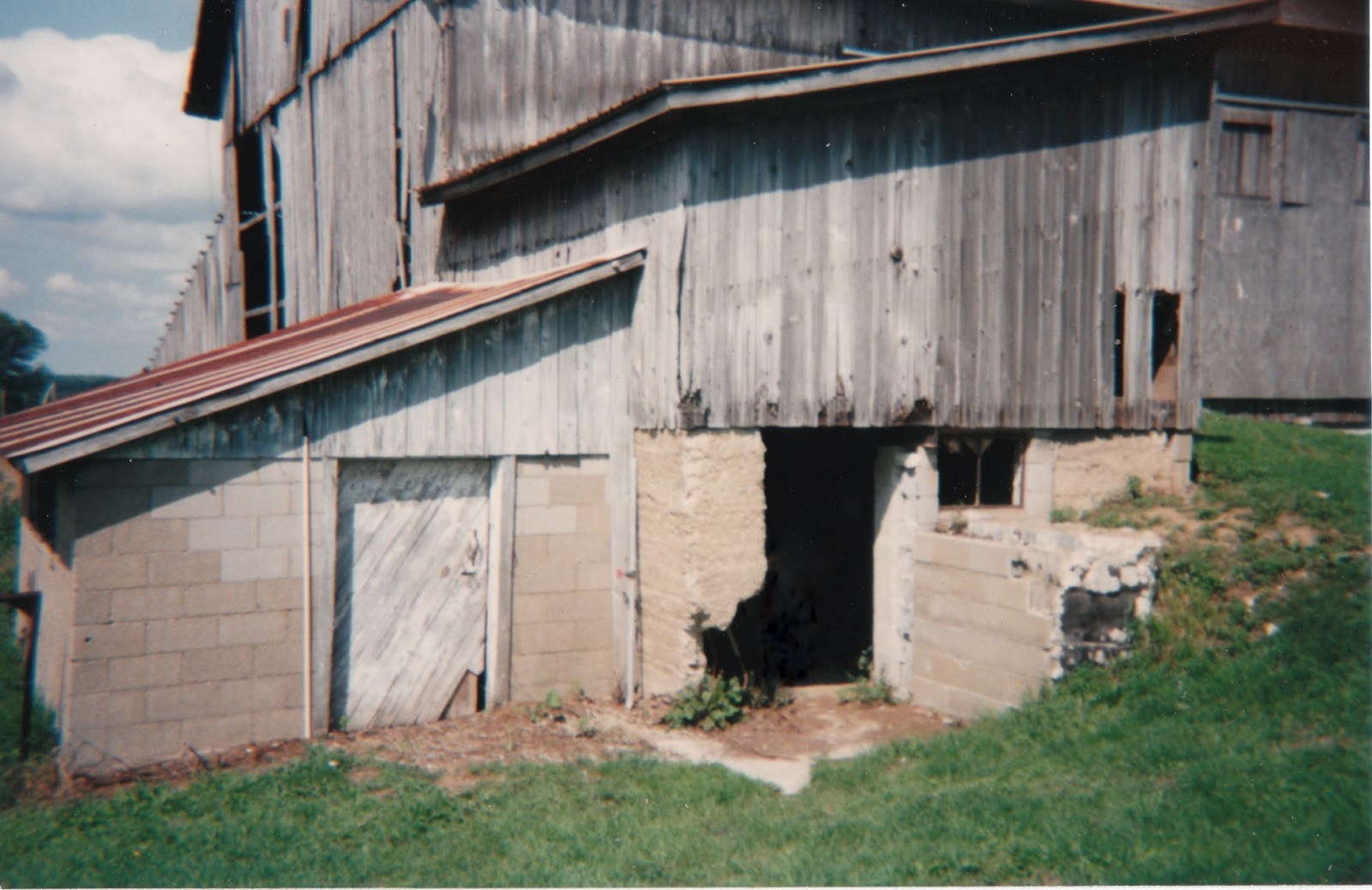 Frankly our first port of call was a bit of a shocker. It was a farmyard in a state of near dereliction with windows hanging out of the frames and a disorganised jumble of crates and bottles scattered about. There was cow muck everywhere. Not very reassuring.  If this was the sort of farm where raw milk is produced then little wonder there are health problems we thought.

Worse was to come. We turned a corner to see three people unloading carcasses from a van. Sheep or pig? We weren’t sure.  However we were certain we wouldn’t be buying any of their sausages when we saw one side of meat slip into the sloppy cow dung on the ground only to be retrieved and given a cursory sleeve-wipe.

That was it. We were out of there and beginning to think the authorities might have a point about raw milk. It seemed to be more about Deliverance than delivery. 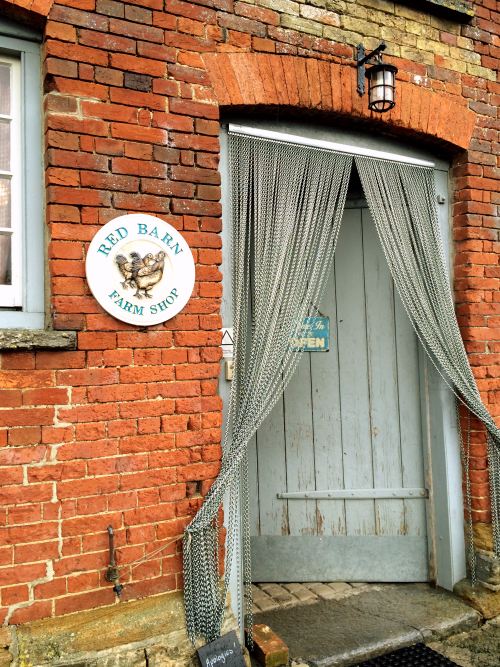 We didn’t give up though and drove on to Hinton Farm which has its own shop, the Red  Barn,  just outside the market town of Yeovil.  What a difference!  The Hinton raw milk dairy, with its herd of Guernsey cows,  has been run by the Bartlett family for generations.

We were made welcome by the cheerful Bartlett sisters busy. It’s a family affair with Catherine running the farm shop and Sarah in charge of the dairy. Their brother James was away for the day but he usually supervises the milking.

“We’ve been drinking raw milk all our lives and there’s not a lot wrong with us, “ said Catherine, “I give it to my children too and they are as healthy as you like.” 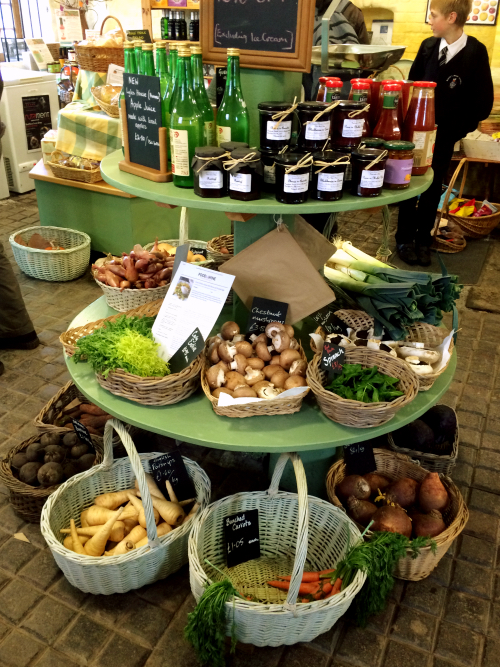 Sarah explained the inspection regime for raw milk producers is rigorous. “We’re tested for bacteria every month by the government’s Food Stardards Agency and if they are too busy to get to us on schedule then we have to pay for a laboratory to test us.

“If there is the slightest sign of anything irregular in the cell count then we have to address it immediately and find the source. It might be a few drops of rainwater got into the system causing a slight contamination. That can mean a total declean of the whole dairy.”

All the windows and doors in the small dairy are made of PVC to allow for steam spraying and there’s no wood where bugs might hide and breed. 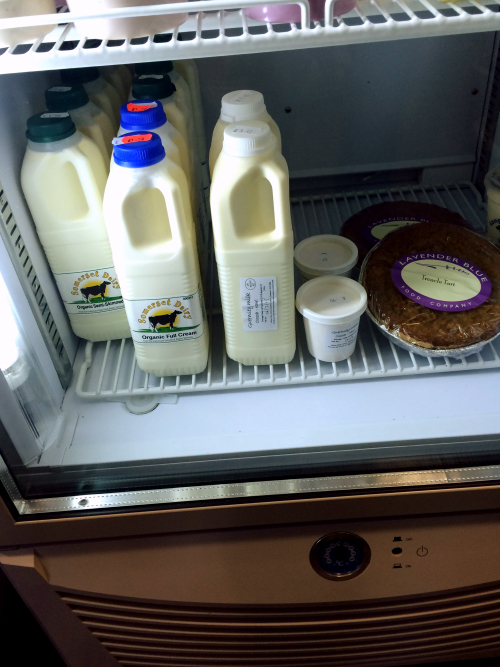 “We’ve got about a hundred cows milking at the moment. Most of our milk though is bought by a big cheese processor who wanted our Guernsey milk to add richness to their products.

“But our contract allows us to keep some of the milk back for the raw milk and cream sales in the shop. We have one customer who drives up from Devon every week for his supply as he swears by the health qualities of raw milk.”

We bought the last two litres of raw milk in the shop chiller cabinet and said our goodbyes to Red Barn sisters. Next stop was the village of Babbacombe where we found Dave Paull, a man who is something of a legend in the world of raw milk. 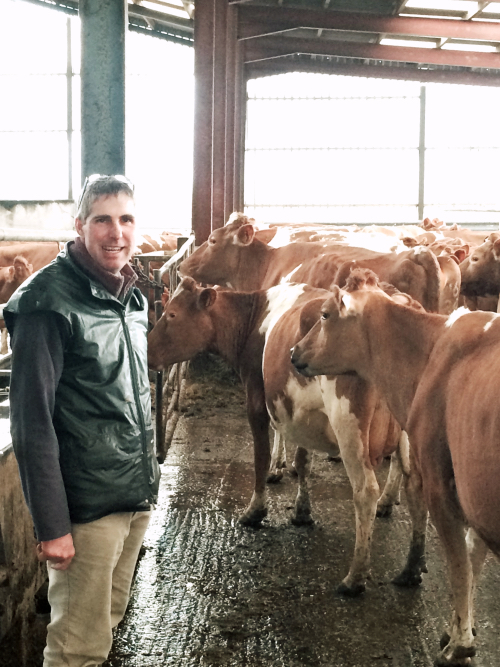 Dave, and his partner Rosie, invited us past a friendly gundog and a line of drying boots into their front parlour to chat. They milk two hundred Guernseys at his Hurdlebrook dairy and Dave has a similar contract with the local cheese processor as his friends the Bartlett’s.

Hurdlebrook also has the same story on hygene standards; an almost obsessive guard against any sign of bacteria. When we mentioned the mess we’d witnessed at the first farm we’d visited both raised their eyebrows and explained those people had already lost their raw milk licence.

“We’ve had Guernseys here since 1953 and came into raw milk almost by accident when my father bought the local milk round 30 years ago,” said Dave, “It happened to be a raw milk and cream business and we just kept it going that way. 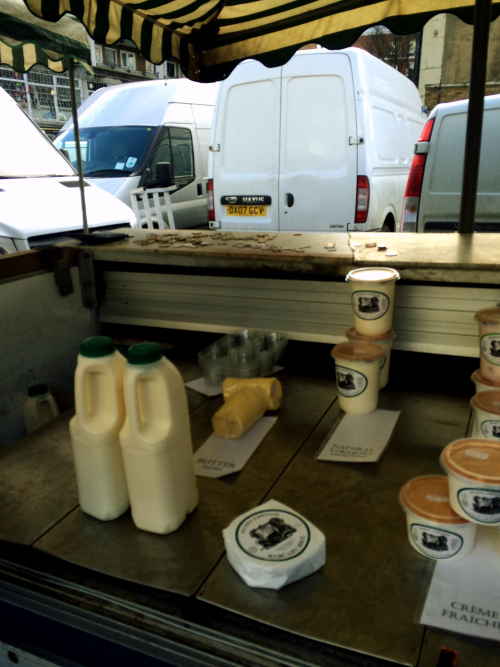 “Things got very tough when the fashion for fat free food came along. The demand for skimmed and semi skimmed milk is not exactly what we’re meeting with our top quality, full cream, heritage milk. It hit us hard at first but we rode the storm and got through it. 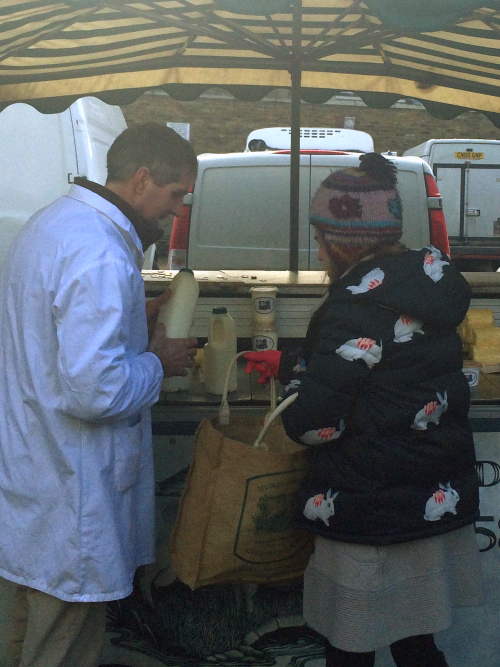 “We produce our own yoghurts too although it would definitely be too dangerous to use raw milk for them as you’d have bacteria competing with each other during what is, after all, a warm process.

“Eventually we started going to local farmers’ markets to sell our milk and that was quite successful but not as profitable as we would have liked.  Then I decided to try Notting Hill Farmers’ Market in London with another local chap who was already selling there. It’s proven to be a winner.”

It was Friday afternoon and Dave was due to go to Notting Hill the following morning. He leaves Somerset at 3. 30 am , drops off yoghurt at several shops en route, then aims to set up at the market by around eight o clock. 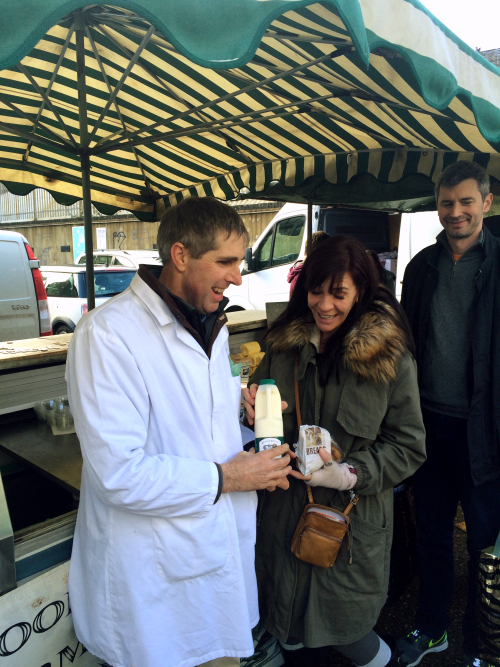 “It’s a long day but its a very worthwhile.  It’s worthwhile financially because I usually sell around five hundred litres of raw milk plus cream and yoghurt. But it’s also very rewarding in other ways.

“For a start the rules mean I have to literally sell my milk directly to the consumer. I have to put it into the customers hand. That way I meet the people who drink my produce. It’s a very direct link and a social contact which I enjoy immensely. 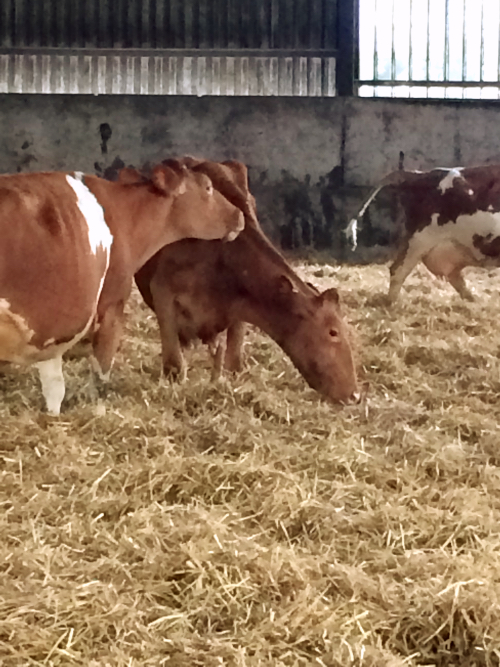 “The other thing is that the London customers are generally more savvy. They’re far more discerning and appreciative and they know all the arguments for and against raw milk. When I started at Notting Hill I’d get people buying my raw milk and thanking me for bringing it to the market. ‘No, no,’ I’d say, ‘Thank you for buying it!’

Dave and Rosie showed us around the dairy and the huge barn they’ve constructed as a winter home for the herd, next to the milking parlour. For the deepest winter months their Guernseys live on fresh laid straw until springtime when they are turned out into the pastures again, heels kicking. 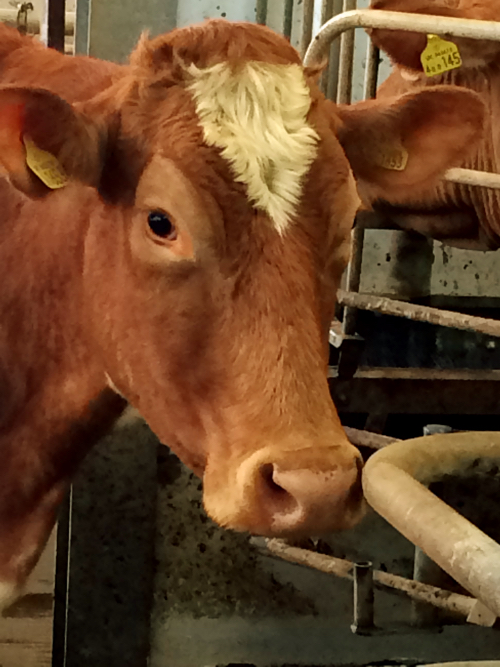 It was a heart warming experience. One cow had already been milked but she was hanging around the parlour; not wandering back into the barn. Dave explained she was waiting to pick up any bits of the feed nuts that might slip onto the dairy floor.

But there was no pressure on her to move out of the way. The whole dairy felt really relaxed which spoke volumes for the tolerance and affection Dave has for his cows. It spoke too of the knowledge he has of each individual in the herd.

Dave has a passion for Guernsey cows. There are only 5000 of the breed registered in the UK as opposed to their cousins the Jersey with 25,000. That makes the Guernsey’s position precarious and Dave is already considering ways to strengthen and outbreed his line. 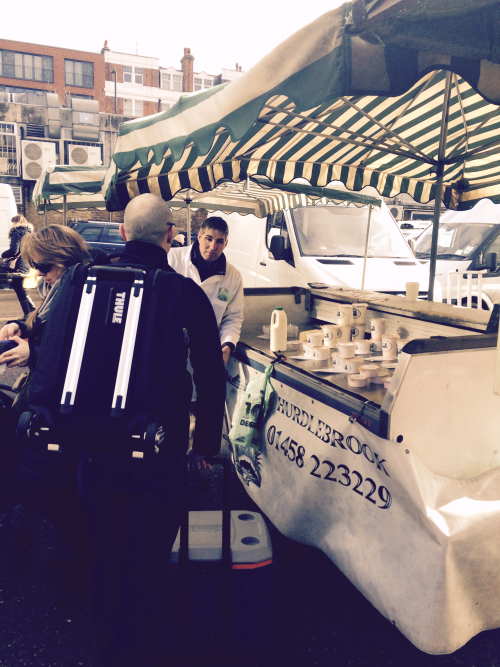 “It’s not easy being a raw milk producer,” he said, “But we believe in it. You have to believe in it to put up with all the regulation and inspections. If it reassures people then that’s fine. We know in our hearts that our milk is the best there is.

“Knowing that makes it hard to square the circle. We are watched like hawks by the Food Standards Agency. But they allow the giant food producers to pour endless quantities of sugar and additives into the food chain. That’s the real threat to public health. There lie the real epidemics of obesity, diabetes and allergy. 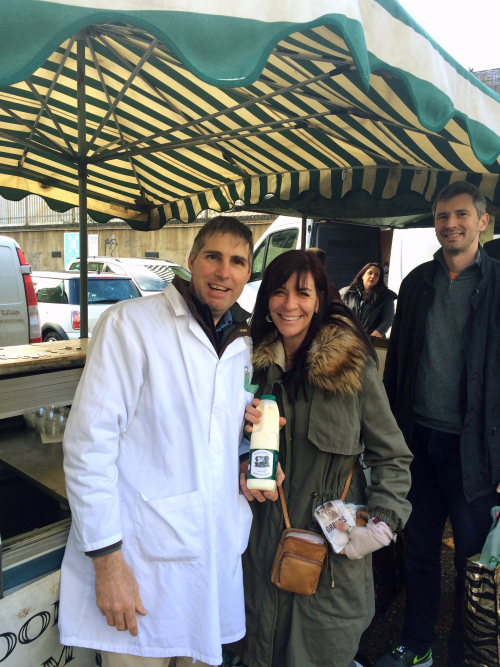 “There’d be no point in producing raw milk from modern Holstein or Friesian cows because they are not capable of producing the golden A2 strings of proteins that traditional heritage breeds like the Guernsey can create. We’re not organic but we are all about tradition, quality and sustainability.”

Three cheers for those three qualities which Bohemian Mojo holds in high regard. And what’s the verdict on raw milk?

Well it tastes of grass and summer rain. It’s rich, fulsome and totally delicious. And its frowned upon by the authorities which gives it just the slightest hint of the delightfully illicit.