Hoof and Vine is Finer than Fine...

Beef and wine. A succulent culinary combination treasured and celebrated by many cultures for centuries.  Whether it’s a wonderfully prepared sirloin steak with a glass of vintage red or a casserole with humbler cuts simmering in artisan wine; we Brits love it.

Normally we’d expect to find this mouth watering pairing on a menu. But Bohemian Mojo went on an expedition into the heart of wild Wales where they stumbled on a unique fusion of beef and wine in delightful combination.

It was a very pleasing match. It wasn’t to be found on an immaculate plate of food in a Michelin starred restaurant. No, it was on the side of a hill looking over the poetic ruins of a medieval Abbey in one of the most beautiful valleys of the British Isles.

This was the way it happened. 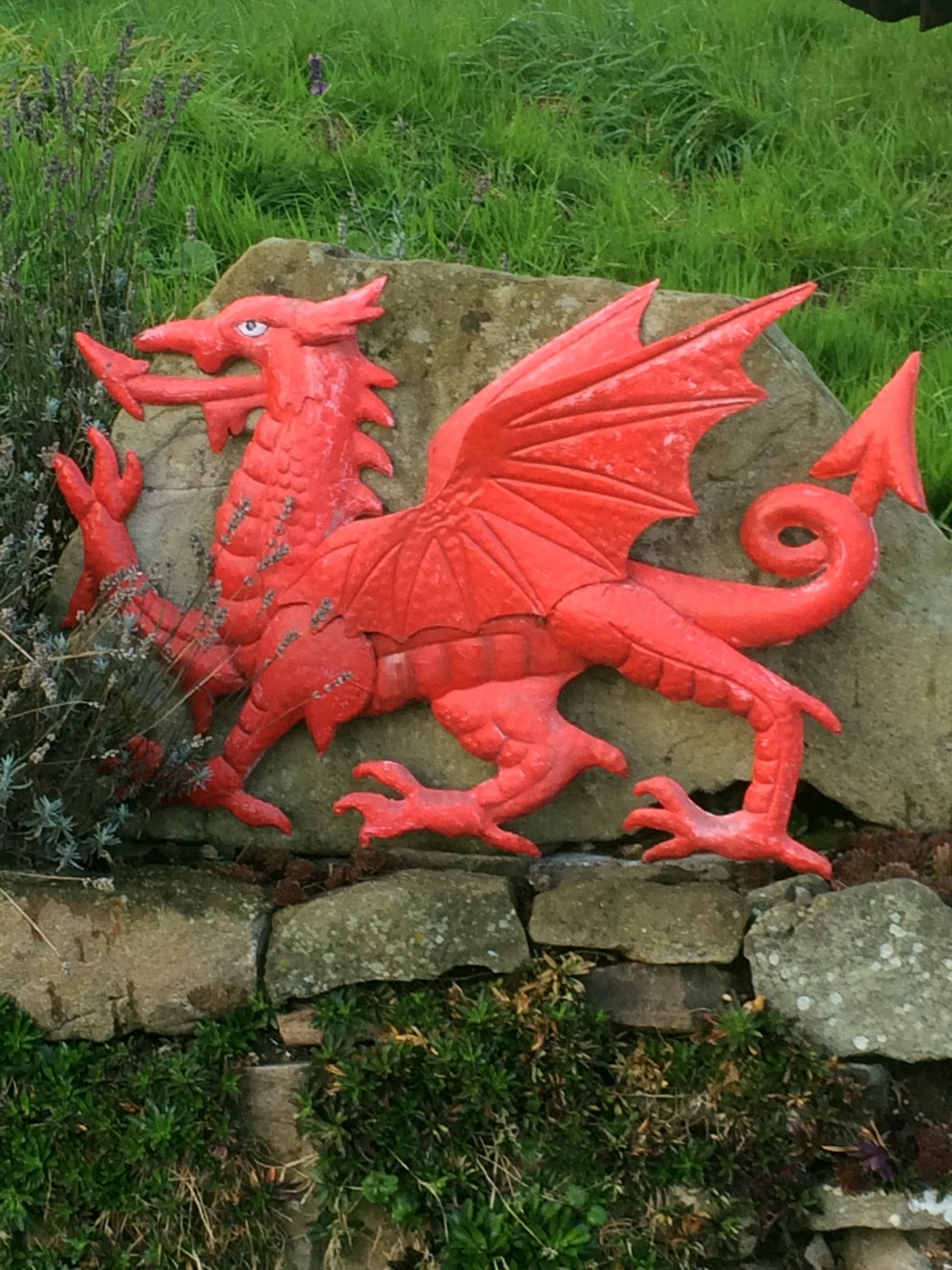 The Mojo trio were half way through their October 2014 tour of the UK. Torrential rain had given way to blue skies and colder winds were starting to paint the woodlands an autumn gold.

We’d heard of great things happening in Wales where winemaking is undergoing a revival. Talk of a bio-dynamic vineyard in the area had everyone very excited and I was asked to lead the Mojo sisters to the area. I’ve known it pretty well all my life.  This was to be the Mojo’s first visit to my homeland and naturally I was anxious they should like the Principality.

The idea was to visit some of the vineyards clustered along the sides of the Wye Valley. Vines have been grown in the area since Roman times but forty years ago the practice was revived along the banks of the river. At first the re-establishment of winemaking was tentative but these days it’s done with award winning confidence. 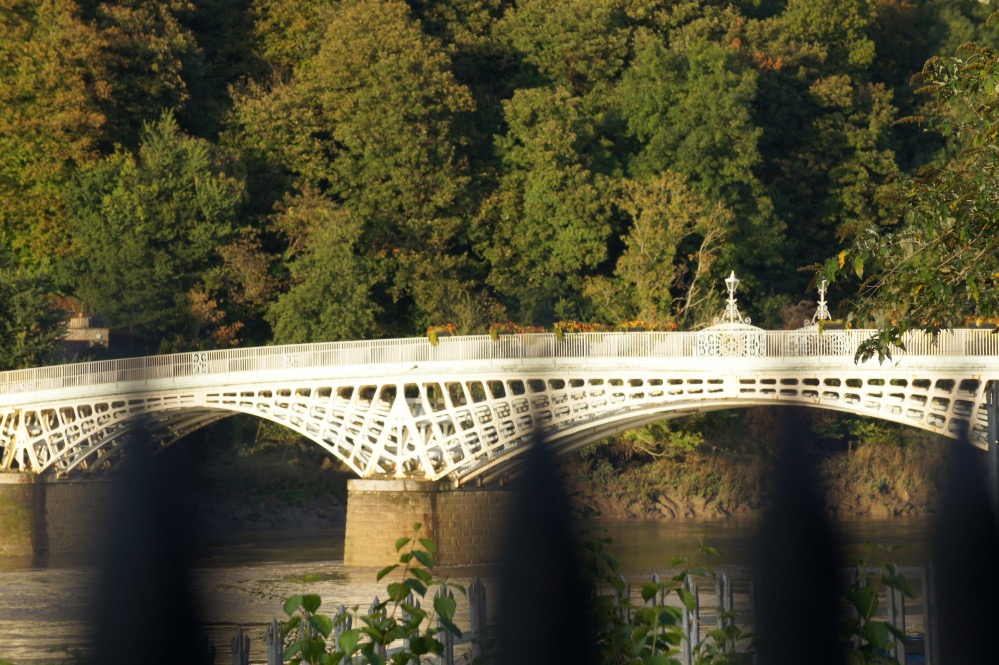 It’s worth saying something about the Wye Valley.

For centuries this was hotly disputed country with the warlike Welsh desperately holding the land-hungry English at bay. It’s a special place renowned for its natural beauty. The River Wye rises in the Cambrian Hills and tumbles out of Wales to mark the border with England.

On its way the Wye waters the lush pastures of Herefordshire and Gloucestershire. It meanders through the world famous beef country of Hereford until it reaches the ancient market town of Ross on Wye.

From there the river is squeezed through a thirty mile long, tree-draped gorge until it flows beneath the medieval watchtowers of Chepstow Castle into the seas of the Bristol Channel.  Along the way the river also curls around the ethereal ruins of Tintern Abbey which inspired great 19th Century poets and painters like Wordsworth and Turner 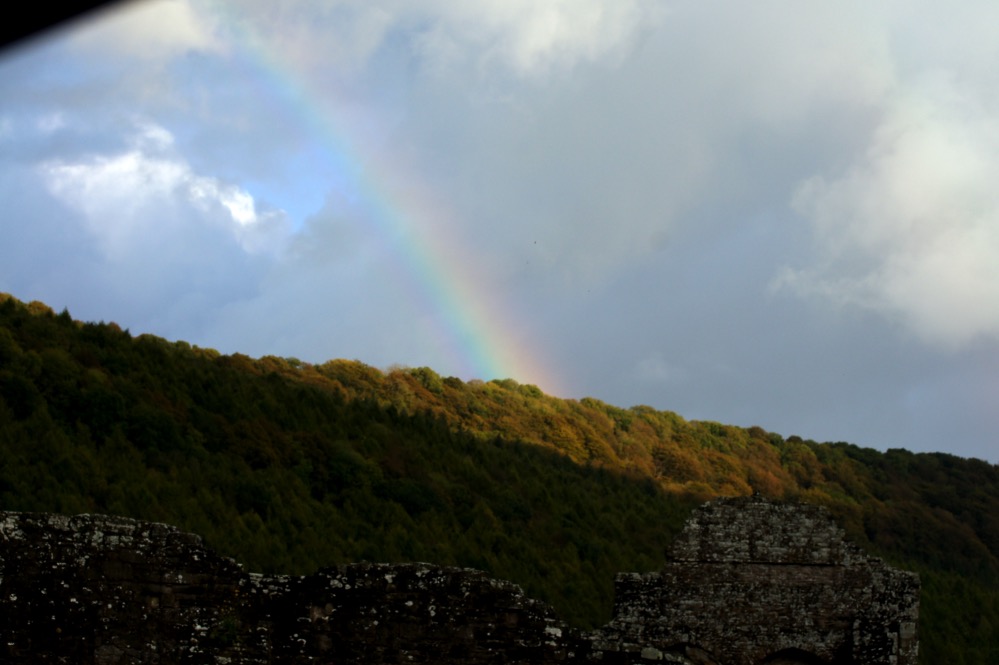 So we set off from the Mojo base, near Cirencester in the Cotswolds, and headed north-west to Ross on Wye. From there we followed the river to Monmouth where the south facing slopes and unique teroire make it suitable for viniculture.

Mojo were particularly interested in the multi-award winning Ancre Hill vineyard just on the outskirts of the town.  We’d heard they plant and pick their vines bio-dynamically and that sparked the investigative curiosity of the crew.

As I say, I know the area quite well, but not well enough it seemed as we were taken on a SatNav odyssey and got completely lost.  It took us several twists and turns and a few stops for human directions before we found the impressive Ancre Hill Vineyard.  Closed! 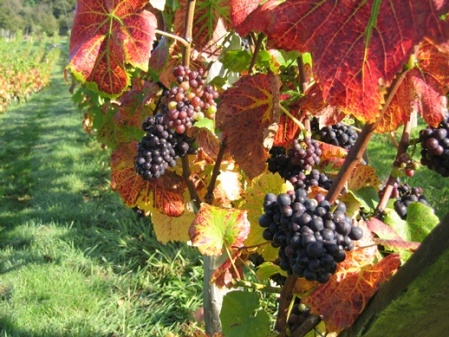 There’d been no suggestion of that on their website but it taught me it’s always best to call ahead.  A major building programme was underway at Ancre Hill an optimistic sign that all is well with winemaking in the area.

Not to be outdone we googled another vineyard nearby. More confusion and another convoluted journey. More stops to ask the way during which we accidentally bumped into the aged, gentleman landowner who had re-introduced viniculture to the area.

We got there to find we could see Ancre Hill just across the fields but two miles away by road! And again we were frustrated as the owner of the second vineyard was just leaving and only had time to toss us a bottle of his best vintage before driving off. Again no tasting session!

Oh well. The gods had conspired against us. We had an hour before dusk so we decided to head for Tintern and see the famous Abbey before the light faded. We were on the outskirts of the village when one of the crew spotted a sign. Parva Farm Vineyard. Vineyard! Let’s go the cry went up! Undeterred by past failure we manoeuvred along a steep track winding up the side of an almost vertical hill. 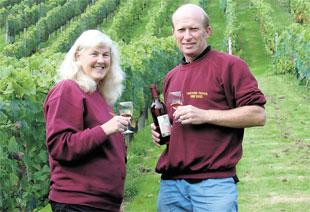 At last! A vineyard that was open! Better still we found the owners, Colin Dudley and his wife Judith, in the middle of harvesting the grapes.  They kindly broke off picking and parked a trailer full of grapes to host us.  We tasted their fine selection of both white and red vintages in their very homely winery shop and cafe. They also brew some really lovely mead from their own honey.

As we chatted the story of Tintern Parva unfolded. Parva basically means ‘attached to the abbey’ and the farm is on a south facing slope right above the old monastery.  Here the monks grew vines right through the medieval period but the farm’s winemaking heritage actually goes back two thousand years to the Romans who brought them to Britain.

During the stormy reign of Henry VIII the Abbey was closed down and winemaking stopped for five hundred years at Tinter Parva until thirty five years ago when vines were planted again. 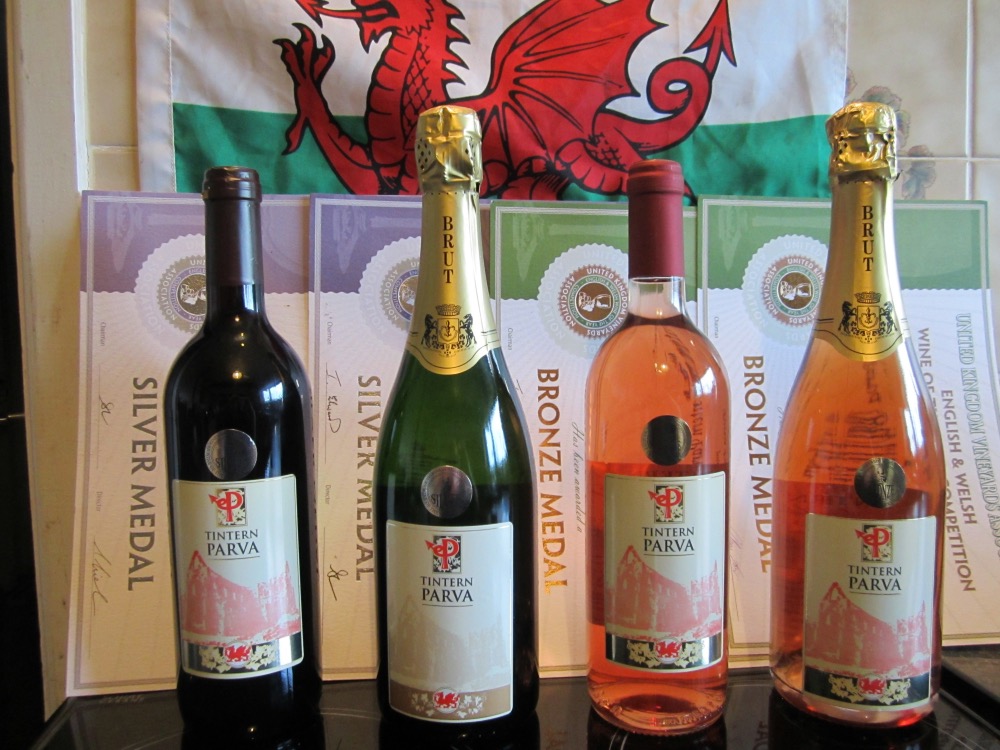 The Dudley’s are very aware of this ancient tradition and they take great pride in their award winning vintages.  They bought the farm in 1996 when the four acres of vines were in dire neglect. A lot of backbreaking work followed as they pruned and re-staked the plants before grubbing out about half of them which couldn’t be saved.

They’d inherited largely late-ripening Pinot Noir grapes but realised they needed some hardier varieties which would yield earlier and could be picked before winter set in on the Wye Valley.

So the Dudley’s planted a modern German red variety, Regent, which ripens weeks earlier and is now the backbone of their production. Today there are 4,500 vines of 17 different varieties growing at Parva Farm, producing some fine, medal winning, Welsh wines.

But you have to look beyond the vines on the south facing slopes above the river and the Abbey ruins to find the real magic the Dudley’s weave.The vines stretch up the hill in mesmerising parallels but in the next pasture the eye is drawn to two wonderful creatures. 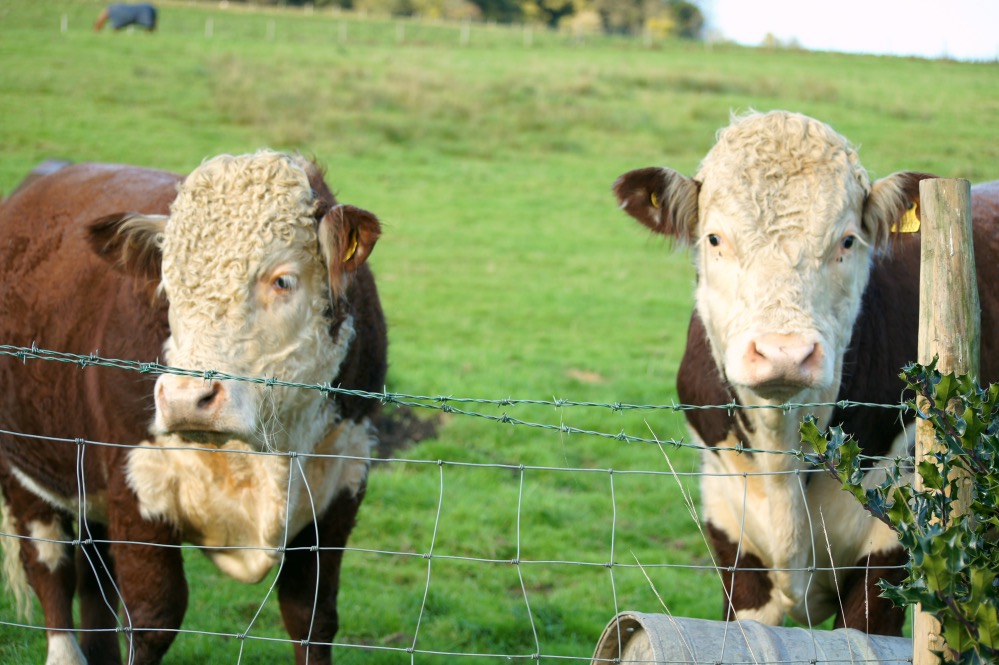 Blinking contentedly they offer their heads over the fence to be scratched. Their names are Marquess and Regner and they are two handsome young bulls from the Dudley’s registered herd of pedigree Hereford beef cattle.

“Their father is my pride and joy. He’s a real champion who’s won a lot of prizes. He’s in the top field, out of sight,” said Colin. His tone suggested the medieval days when this border country was the domain of Welsh cattle rustlers may have gone but he was taking no chances!

“Traditional red beef cattle with white faces were grown right along this border country for centuries,” said Colin, “Eventually they started calling them Herefords. I love them.

“Their colours are on the other end of the spectrum from the rich greens of the grass that grows hereabouts. To my mind there is nothing more aesthetically pleasing than the sight of a well bred Hereford standing in a rich green Wye pasture. It’s like a painting on the landscape.”

Wow! I know a lot of farmer’s with great passion, pride and love for the stock they rear but I never thought I’d hear one describe his cattle so poetically.  Colin truly has the vision to see his cattle as works of art.

And what he expresses is at the heart of Mojo thinking. It crystallises a lyrical passion for the grounded and the authentic. Here were a couple who put their heart and soul into what they can create and achieve on the land. 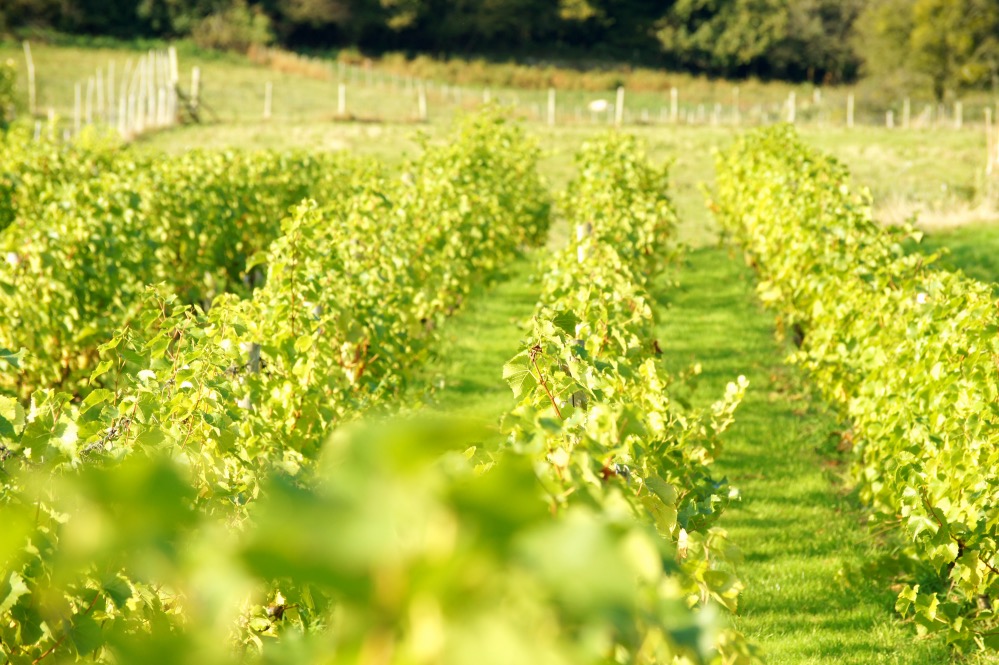 It’s a difficult place with thin soil clinging onto the side of a precipitous hill. But they put their love into what they grow on it; be it a grapevine or a prize Hereford bull.  That’s a wonderful and a humbling thing to witness.

“Oh! By the way,” said Colin, “All the Hereford calves bred here are named after vintages.  These two, Marquess and Regna, are both named after types of grape vine and their father is called Dinka after a Hungarian variety.”

So there we had it. Wine and beef together in a perfect fusion. Not on a plate or in a crystal glass but on the vine and on the hoof; served up on a timeless landscape.