THE HOME OF THE BRAVE 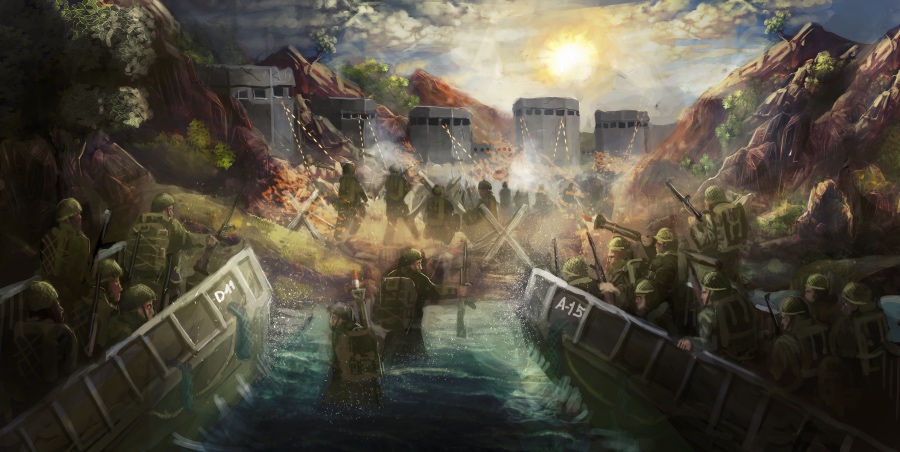 Seventy-five years ago the British Isles were an armed encampment lying off the shores of Hitler’s conquered Europe. There were millions of troops crammed into every conceivable space between the native inhabitants. They came from all the countries of the British Empire. There were fighters from Europe too who’d fled here to carry on the fight and of course there were the massed ranks of our American allies.

On June 6th 1944 the greatest fleet ever seen left these shores to smash against the beaches of Normandy in that noble clash against Nazism they call D-Day. But the night before that awesome invasion Airborne troops from Britain, Poland, France and the USA dropped behind the line of Hitler’s ‘Atlantic Wall’ to spearhead the attack.

One of those Airborne detachments has since been catapulted into fame by a blockbuster Hollywood series featuring the heroes of the American 101st Airborne. They were the men of Easy Company, the famous Band of Brothers.  But before the drama of D-Day the men of Easy spent months living and training in a tiny Wiltshire village called Aldbourne.

The story of Aldbourne and Easy Company are now inextricably entwined and last week an open day was held at an archaeological dig on the village soccer pitch. It opened a window into the days of that English spring when cuckoos called and paratroopers readied for the storm.  What they found was an unexpected story of military pride and courage. It seems fitting to tell this story on the 75th Anniversary of D-Day.

At Bohemianmojo we’ve written about the American presence in the Wiltshire countryside before. It is a poigniant history but my visit to the dig on Aldbourne soccer pitch revealed a story of one soldier’s secret dilemma that had literally been hidden since the eve of D-Day.

First a word about Aldbourne, which lies about six miles from my home near the town of Marlborough. It is quintessentially English and scenes of the village pond or the village green could easily feature on the front of a chocolate box. For a while this utterly charming setting was home to Easy Company.

Most of them were billeted in Nissen Huts (Americans call them Quonset Huts) hastily set up on the soccer pitch, some of them in cleaned-out racehorse stables near the village green. The officers were billeted with local families.

At the time their Commanding Officer was Captain Sobel, a nit-picking, authoritarian bully by all accounts but his reign was to end at Aldbourne and his role was eventually taken by Captain Richard Winters, who ended the war as a Major. Richard Winters was billeted at the village post office.

After the war the Nissen Huts were removed and the village pitch re-turfed ready for the new soccer season but life was never the same again not least because of the lasting bond that was forged between Aldbourne and the Veterans of Easy Company. Sadly and inevitably their numbers have declined with the decades until most of them have passed away or aren’t fit enough to make the once regular pilgrimage to their old English home. Still they’re remembered.

Sergeant Walshe served with The Rifles and was dealing with soldiers who had complex problems from blast injuries through to PTSD. Something was telling him that his first specialty of archaeology had the potential to provide excellent outdoor therapy for these men and women. 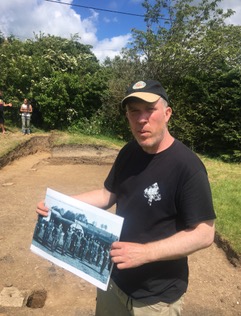 He put a call through to Richard Osgood, who is responsible for archaeology on the Ministry of Defence estate. Within weeks Riflemen, assisted and guided by a team of academics assembled by Richard, were digging on a Bronze Age site. Many other digs have followed and the scheme has broadened from the Rifles to the rest of the Armed Forces.

So it was that seven servicemen and women from the Army and the Royal Air Force turned up with professional archaeologists to dig on the Aldbourne soccer pitch. Armed with old WWII maps and their own geophysical survey they found the hut assigned to Easy Company’s sergeants. It’s pretty obvious why the sergeants bagged that hut when you look at its location. It’s in the corner of the pitch closest to the village centre AKA the pub and only forty feet away from the cookhouse.

The team exposed the footings of the Nissen Hut in a trench and when I arrived at the Open Day with my friend Mike Ghent, a retired Major, I was delighted to see Richard Osgood on site. We hadn’t met since I’d spent a day with Operation Nightingale in 2012 when it was newly created and his enthusiasm was even greater than seven years ago.

“So that’s the site of the sergeant’s hut,“ Richard pointed at the trench, “If you know the story of the Band of Brothers that’s where the sergeants plotted the downfall of Captain Sobel. He’d proved to be pretty ineffective on exercises and they feared for Easy Company’s fate if Sobel led them into battle. We all know it’s the sergeants who really run any army and when they made their deep concerns clear the top brass removed Sobel. Eventually Richard Winters led Easy and the rest, as they say, is history.  Just think of it though. It was in the hut on that site they discussed their strategy to get a new CO. Brilliant isn’t it?”

It is Richard, it really is. Once again archaeology illuminates the past but there was more and he told me to go to the Finds Tent where there were the remains of a parachute, a tattered piece of once white but now dingy parachute silk and the oxidised metal handle of the ripcord.

“We found them buried on the site of the sergeants’ hut and they tell us a quite an amazing story of pride and the need someone had to literally bury a mistake. You see we know those were components of the spare parachute. A main chute was camouflaged not white and that ripcord handle has been identified as belonging to the spare chute as well.

“The only reason we can come up with for anyone burying their spare chute is if one of the men had accidentally pulled and deployed it while preparing for training. We know from anecdotal accounts this would have been the source of a lot of leg-pulling and adverse comments from his comrades because it showed lack of attention to detail and poor military skills. 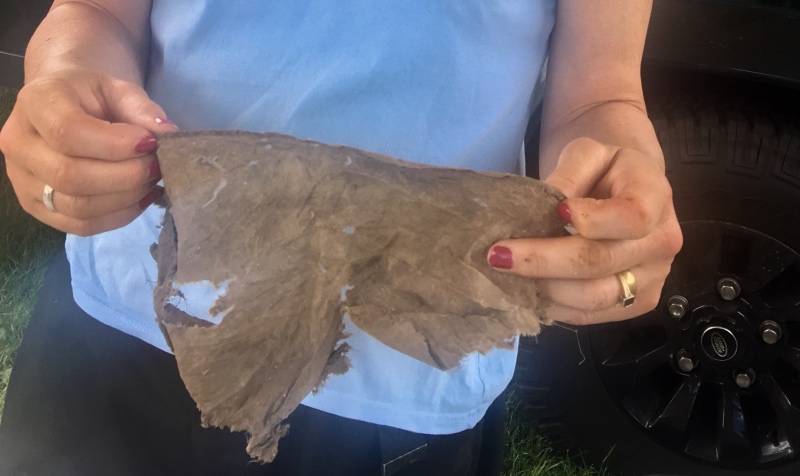 “We’re pretty sure he buried his spare chute to avoid the embarrassment of what he’d done and it’s a pretty good bet that this member of Easy Company went into D-Day without his spare chute.  It’s a story that eloquently describes the pride of the unit and the courage of an individual paratrooper. We’ll never know who he is and we’ll never know if he made it home but we do know he was a brave man.”

What a fantastic story and what a truly remarkable glimpse into the mind set of those elite paratroopers. And once again Bohemianmojo is left wondering at the power of archaeology to conjure great stories and to offer a release to people in stress and in need of healing. Those of you who’d like to know about Operation Nightingale can find more detail and a transcript of a newspaper article I wrote about the project in 2012 here.

Meanwhile let’s all salute the power of Sergeants too. A special breed of men who will always find a spot close to the pub and will never be too far away from the cookhouse. Neither will they suffer fools gladly, if at all.