For the past three weeks Bohemianmojo has been showcasing our series on King Arthur trying to answer the question; was he a real person or a fable? We believe he was a real, historical figure and to back up our case we’ve presented Bardic poems, the manuscripts of monastic scholars and archaeological facts. Along the way we’ve explained some of the historical context of Arthur’s time and the full-on warfare that consumed the lives of the people of the British Isles during the Dark Ages of the 5th and 6th Centuries AD.

In this fourth, and final, installment we’ll look at the inner meanings of some of the themes of the Arthurian legend and finally, we’ll call on the ancient knowledge of the stars to offer a new and exclusively Bohemianmojo explanation for Arthur’s legend.

To do this we’ll first have to explain the religious background to the anarchic days of the Dark Ages.

When the Romans conquered the British Isles in A.D 43 the native Celtic society was entirely in the thrall of the Druid religion as were the Celts of much of Europe, including Gaul. The Romans, for various reasons, detested Druidism and recognized that Druids were inciting the people to resist their invasion. The Roman answer was to try to eradicate the religion and claimed to have killed off all the Druids in an attack on the island of Anglesey in Wales coinciding with the revolt led by Boudicca. 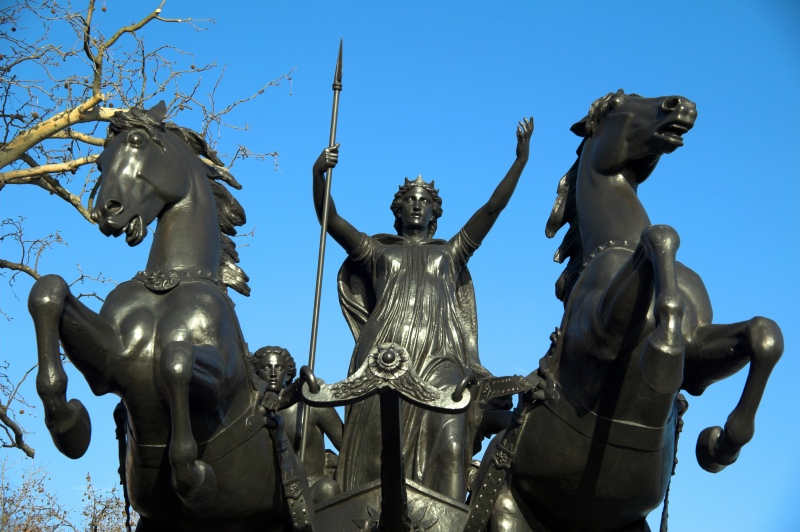 However we know from history that it’s not so easy to wipe cultures or races off the face of the earth. Hitler failed to do it and despite the best efforts of Europeans the Native Americans still cling onto their culture. Like them the Druids survived but the native Britons had Roman gods superimposed on their own pantheon of deities too. Then the Emperor Constantine II converted to Christianity around A.D. 313 and ordered his Legions to convert too. The troops, who were keen on their own god Mithras, paid lip service to the Emperor’s order but little of the Christian message filtered through from Rome to their northernmost outpost. Basically it was treated as just another cult.

By the time the Romans retreated from Britain the Celtic tribes were still largely pagan with outposts of Christianity beginning to take hold here and there. It wasn’t until 597AD that the missionary Augustine converted the Saxons to Christianity so that it only really began to take hold on British soil after the Saxon invasion. There are those of course who dispute there was a Saxon invasion at all but this is, not surprisingly, an Anglo-Saxon/English narrative perpetuated by those who even deny there are Celts at all. And one of the biggest myths about Arthur is the Anglicizing of this essentially Welsh war leader into an English one. If there’s one thing we can say with certainty about Arthur it’s that he was not a proto-English King.

So we can be sure during that during time of Arthur the Druids were still active and the ‘Old Religion’ and its superstitions and beliefs were still in practice alongside some Roman gods and an increasingly potent Christian message. We only have to turn to the story of St. Patrick, who was active at the same time as Arthur, for confirmation of this religious state of affairs. Patrick, a Romano Britain, was first taken to Ireland as a slave and returned as a Christian missionary. Catholic history records that he apparently drove ‘snakes’ out of Ireland. Strange indeed when you realize snakes never reached Ireland because of the effects of the Ice Age. But the ancient word for an adder and a Druid is the same - ‘gnadr’ – land this is because Druids practiced Ophism; the worship of snakes. There are other examples of this ‘serpent’ eradication on the mainland too. Bohemianmojo will be writing about the Druid’s in the not too distant future and revealing some sensational findings about the tradition. 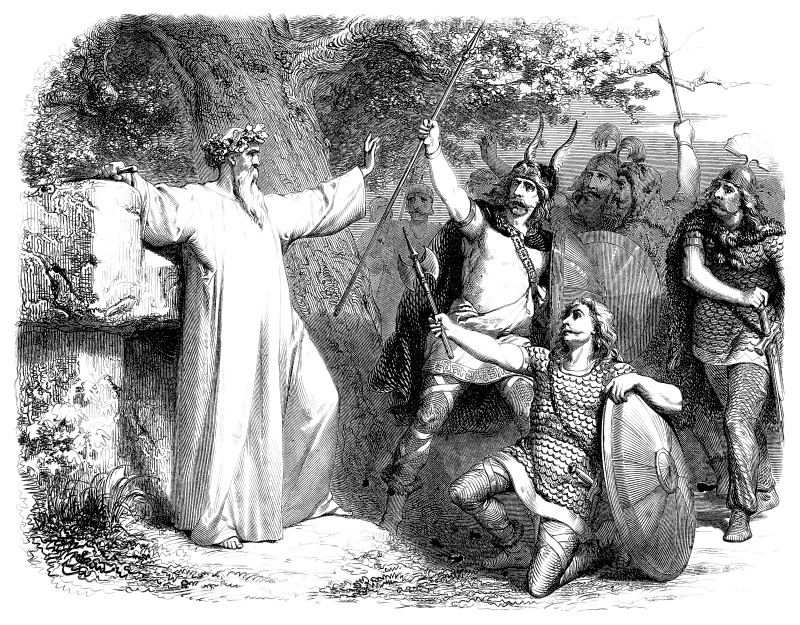 Back then to the legend of King Arthur where there are at least three very interesting Druidic memes within the Arthurian fables. The first Druidic theme is the presence of a magician called Merlin within the story. We have no doubt whatsoever that the famous wizard represents a Druid as he comes directly from the Bardic tradition. The Bards were the last of the Druids and many of their poems are coded expressions of Druid lore passed on in the oral tradition not forgetting that Taliesin claimed he was indeed Merlin or Myrddin in its Welsh form.

The second meme is the legend of the Lady of the Lake. In Celtic tradition high value objects were given as offerings to the Gods by throwing them into streams or lakes. In Celtic lore water is the liminal element, the veil between dimensions, and a natural conduit for making a gift to the deities. It’s still alive today but in a form acceptable to Christianity. Think about it. Who among us has not thrown a coin into a wishing well? In the Iron Age Druid deities like Sul were worshipped at the hot springs in Bath; later taken over by the Romans and called Aqua Sulis. And there was another Celtic water goddess called Elen who was given votive offerings. Coins, weapons, messages were all offered at sacred springs, lakes and rivers and some of our most magnificent archaeological finds have been water offerings like the wonderful Battersea Shield taken out of the River Thames. In the Dark Ages this form of offering would still have been practiced, in fact it’s still practiced by some to this day, and it would have been natural for a sword of Excalibur’s fame and potency to be ‘given back’ to the gods in the form of the lake spirit…The Lady of the Lake...the Medieval version of the goddess Elen.

The third Druidic meme is way the most significant of all as it impacts the heart of Christianity itself with the Arthurian legend injecting a Druidic icon directly into the heart of that religion. It is the legend of The Holy Grail. First you have to understand that cauldrons were central to Druidic worship and cauldrons intricately decorated with images of the gods were used for making sacred brews to be shared at important ceremonies. One of the most famous is the Gunderstrop Cauldron found at a Celtic site in modern Denmark but there are others like the Marlborough Cauldron found in the Wiltshire town, which has long been cited as the birthplace of Merlin himself.

These cauldrons were associated with curing illness and specifically with immortality in the sense it is understood within Druid lore (we will be looking at the Druids in future postings). In his famous collection of stories the Mabinogion the Bard Taliesin tells the story of King Bran the Blessed whose daughter married the King of Ireland. There is betrayal and abuse and Bran fights a genocidal war in Ireland for vengeance and takes as booty a magical cauldron he had given to the Irish King as compensation for a slight.  Bran is killed but his head is taken in the cauldron and he is brought to life and is able to speak for 80 years while living on an island before he is taken to London.

While Geoffrey of Monmouth, a monk with imagination, was researching the Welsh sources he came across this cauldron story and rehashed it. The massively powerful Druidic icon of the cauldron became the immortality bestowing-chalice that Christ drank from at the Last Supper. We find Lancelot returning to the Round Table after a spiritual revival at a nunnery and a vision of the Holy Grail floated above the knights compelling them to go on Quests to find it. Most returned badly wounded or died and the Quest goes on to this day we are told; Indiana Jones is the latest legendary hero to go on a Grail quest in the movie. This Arthurian reference to the Holy Grail was then lifted and rewritten by French writers in the 13th Century and so the Grail legend became one of Christianity’s most potent symbols courtesy of a Druidic source; a strange paradox indeed.

So exactly who was Arthur? In his excellent book Arthur – the Mystery Unravelled

, author Chris Barber identifies him as Athrwys ap Meurig, the hereditary King of the Silures, the powerful Celtic tribe of South Wales who were much feared and admired by the Romans. Perhaps Chris Barber is right and ap Meurig was the real deal. However we have our own theory on the Arthurian legend for which we owe a debt of thanks to a clever and somewhat driven Welsh solicitor from a jewel of a town called Abergavenni. The late John Godfrey Williams was an expert dowser and a well-known authority on the ancient Stones of Wales (a friend of Chris Barber they wrote a book on the subject together).  J G Williams was extremely interested in the Arthur legend to the point where he decided to catalogue the names of all the places in the UK (and Brittany), which have names linked to Arthur. It took him thirty years to identify and map three hundred sites all over Britain and Ireland with names linked to Arthur. Or were they?

The foreword to his book – Arthur. Prehistoric Sites & Place Names

- explains many of these places are the sites of ancient standing stones, tumuli, dolmen, earthworks or burial mounds. The provenance of most of these sites is Neolithic or Bronze Age, literally thousands of years before the time of Arthur. Furthermore, and this is really mind-blowing, J G Williams discovered many of the sites are linked through multiples of the Angle of Declination. What’s that you may ask?  Well, the Angle of Declination is the difference between Magnetic North and True North, which is 23.5 degrees. J G Williams’ survey found lines at that angle or its multiples, 47 degrees, 70.5 degrees, 94 degrees or 117. 5 degrees, linked the sites.

We shouldn’t be overly surprised the Bronze Age ancients had such sophisticated knowledge. Famously Stonehenge itself is a Solstice clock and recently it has been proved it can also be used to predict lunar eclipses of the sun. There are other examples of advanced mathematical knowledge, which we hope to reveal when Bohemianmojo takes a look at the Druids in the future.

So, why were these sites named in connection with Arthur ?  The answer lies in the North Star, also called the Pole Star, which is the heavenly marker of True North. Many cultures call the cluster of seven stars, including the Pole Star, by the name Great Bear. It is believed that in the ancient Welsh language the root of the name Arthur is Arth for bear and Vawr for Great. In other words these ancient places must have been named in honour of the all-powerful constellation of Ursus Major – the Great Bear – and not the legendary King Arthur.

At Bohemianmojo we take this knowledge to its logical conclusion. In our view the Celts of the British Isles named their stellar war leaders after their most celebrated body in the heavens the Great Bear. Just as the Romans had a title of Dux Bellorum the Ancient Britons had an honorific name for the Paramount War Leader of a number of tribes when they joined together against a common enemy? We believe they called him Arthur and we think there was probably more than one ‘Arthur’ over the centuries. And, yes, perhaps Chris Barber is right when he names Athrwys ap Meurig the King of the Silures as the man who made the legend; one of a line of Great Bears.